Mundaka Surf Shop is historically one of the first surf shops to open in the region back in 1985. In those early days, they offered much needed surfing equipment to not only locals but to all the visitors that came in search of the famous wave. The shop is located only 100 metres from the river estuary and the wave considered as `Europe’s Longest Left´

Mundaka Surf Shop ́s founder, Craig Sage, left his hometown of Newcastle Australia in 1980, embarking on his dream to find perfect waves in Europe. During that summer, Craig worked as a lifeguard on the beaches of Cornwall on England ́s south west coast. After the season, he travelled with his surfing mate  `Skip´ to Mundaka and surf Europe’s best wave.

Bitten by the Surf bug

During his school days, Craig listened to the surfing tales spoken by such characters as Mark Richards and Peter McCabe, who boasted of waves in far off places like Hawaii and Bali. Craig’s desire to find the perfect wave brought him to Mundaka in September of 1980. On this initial contact, Craig realized the full power of the longest left of Mundaka and this spiked the everlasting adrenalin emotion that would continue forever in his veins.

After working the following 2 years as lifeguard in Cornwall and traveling in the off seasons to places like California, Mexico, Texas and North Carolina.In September 1982 Craig decided to return to Mundaka to conquer the best wave in Europe before returning to complete his studies in his hometown , at Newcastle university

“My technique had improved considerably after surfing many exotic waves in USA and Mexico initiating my desire to return to Mundaka to surf the wave of his dreams before return to my studies.”

In September 1982 , Craig ́s dream was realized , returning to Mundaka for a month at first, but he continued to delay his return to Australia until he was notified in early 1983 that his return ticket had been forfeited. Since that day, Craig has lived and adapted to life in this quaint fishing village and of course with Europe’s `Longest Left ´.

Being an able lifeguard, Craig obtained the job in the port of Mundaka and was given a small shed that he used not only for the lifeguard’s needs but also for the first surfboards and wetsuits that were left by other travelling surfers.

By Autumn with the first swell, he realized that the material he had to offer was not adequate for the conditions, so Craig began to search for better one such as boards from Maurice Cole in Hossegor, wetsuits from Rip Curl, but most importantly legropes from Ocean & Earth, a true lifesaver avoiding the troublesome swim in the estuary when one looses his board. This is where Mundaka Surf Shop was born, the only surf shop in Mundaka since 1983 and one of the first ones in the Basque Country.

Organising the 1º Mundaka Surf Classic in 1985, converting it to a PROAM in 1989 and the formation of EHSF as an Independent Federation in Europe, was all due to Craig’s involvement. When Billabong landed in Europe in the early 90’s, Craig established Mundaka as the local office and distribution for the growing Australian surf brand. In 1999 Mundaka entered the World circuit alongside with Anglet to celebrate the first WCT event in the territory. This marked a whole new history change for the Cantabrian coast.

Craig has always dedicated much of his time to teaching locals to surf. It is a passion that he still enjoys. For the last 40 years, he has been spending many hours in the water with young and old, making their surf experience the best it can be. The surf school was nominated nº2 in the Basque Country by Surfing Euskadi for the installations and quality of the teaching. Something he is proud to offer for many more years to come.

Mundaka Surf to Live is the book in which Craig tells us his story and the history of Surfing in Mundaka, one of the best and most famous European waves.

A book written in three languages ​​(Basque, Spanish and English), full of beautiful images and curious and entertaining anecdotes.

If you want to get a copy send us an email to info@mundakasurfshop.com 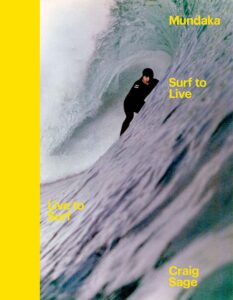